Ancient Memories - The Agency of Stone


For thousands of years, stones have been used to mark specials places and experiences. In the Hebrew Bible, Abraham sets a stone at the place where he first hears Yahweh's Voice. Stone altars have been set wherever humans have had interactions with the divine. Stones have been carved into gods and goddesses. Stones are placed to commemorate loved ones who have died. Stones are set up recognize sites of historic import. In the online class I just completed through EDx, one of the first assignments was to answer the question, "Do stones have agency?" This is how I answered: 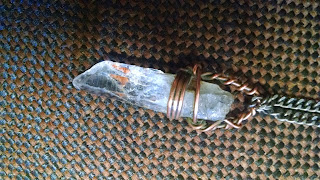 This is my special crystal. I chose this crystal from a table filled with other pieces broken off some larger quartz. I have had it since the summer 1987, a summer I call my "summer of love," 20 years after the original. I stood with my friend as we looked over the table hosted by the Rainbow People, a group of hippies who came to Venice Beach to sell their crafts. I held my hand over the stones, "listening" for a call, a sense, a feeling that would tell me which stone was mine. I felt a warmth, and I knew that this stone, the one with a heart-shaped crack and a little bit of rainbow inside belonged to me.


I believe that all creation is connected, that the Divine is that which connects us, that calls us to our greater good, whatever that might be. This view of All That Is cannot see anything, any part of creation, as being absolutely static. Are they sentient, these stones? Perhaps not, at least not in the same way animals are sentient. Do they have "agency?" I think so, though how this can be is a Mystery. Who is to say that I did not place the meaning of the "warmth" I felt upon the stone; yet, who is to say that the stone didn't actually "call" to me?

I think the "agency" is in the energy of the stone, and perhaps at quantum level, our energies reached out to one another. Meaning, now, is imbued by a person's - or a people's - understanding of the world around them. It might change as the culture changes, and the worldview of the people changes. That there is a meaning might continue to be understood long after the original meaning is lost. Stonehenge and other stone circles have meaning, though the original purpose of such megalithic collections has been lost. Yet today, these stones are held as sacred by modern Druids and other Neo-Pagans, given meaning by the very mystery that surrounds them.

I have a rustic stone labyrinth in my backyard. When I walk into the center of the spiral, I can easily imagine that I am transcending space and time. If I walk a labyrinth made of brick, this imaginary time-travel is more difficult. Why is this? Is it a failing of my imagination, or do the ancient natural stones that line my path lend me their memories?

Once I stood silently in the Petrified Forest in Arizona. The winds blew constant, and upon the winds I could hear the whispers of the trees in the once lush forests so long turned to stone. Perhaps it was only my imagination. Perhaps it was the memories of the ancient trees.
Posted by Suzy Jacobson Cherry at 5:11 PM

Sermons and Messages beginning April, 2014 can be found at Suzy's Sermon Blog

A Little About Suzy