I have been driving from Mesa, Arizona to Claremont, California to attend classes for a few years now.  Along the way, I have stopped at rest areas and gas stations to refresh and refuel.  Some of the rest areas have become my favorites.  The Whitewater Rest Area just past Palm Springs, for instance, is one of the most beautiful stops along Interstate 10.  Whenever it’s open, I try to stop, even if it’s just to stretch and enjoy the view.  On the westbound side, it’s a beautiful park with a majestic view of snow-topped mountains.  On the eastbound side, I can meditate on the deep green of farmland surrounded by the mountains.  It’s a welcome oasis during a hectic commute and a comfortable place to rest when exhaustion overcomes.

When the rest areas are closed, or I have another reason to stop, there are gas stations and travel centers.  Usually, these are not my favorite spots along the way.  There is one gas station, however, where I have stopped many times out of necessity.  For most of my commuting semesters, I avoided stopping there, opting to try to make it to the next rest area.  This semester, the rest areas have been closed, so my pattern has been forced to change.  In this change, I have made a surprising discovery.

Chiriaco Summit, located just about 30 miles east of Coachella, is much more than a gas station.  Nearby, there is a small café and a George S. Patton museum.  The people in the gas station and store are always friendly.  There is plenty of room for truck and car parking, so I am never alone when I stop there.  In the past, I have parked, leaned my car seat back, and slept until I was ready to hit the road again.  That is, until just two weeks ago.  That day, I pulled in early in the morning, barely able to keep my eyes open.  After calling my husband to check in and taking a quick trip to answer nature’s call, I locked myself into the car, leaned back in my seat, and slept for an hour or so.  When I awoke, I took out my hairbrush and opened the mirror.  As I brushed my hair into a ponytail, I noticed something I had never seen before.  Over my shoulder, I caught a glimpse of a statue of Mary, the Mother of Christ.  I was startled.  How had I never seen her before?  I was intrigued.  I finished putting up my hair and took a little walk to visit Mary.

As I approached her, I caught sight of a huge plaque I had never seen before.  It explained the history of this small area, named after the Chiriaco family, whose patriarch had settled in that spot in the mid-20th century.  He had built the gas station and store with the intent of serving the traveling community.  Over time, the area had been developed into what it is now.  Glancing up from the plaque, I could see what it had become.  There is a post office, a trailer park, an information center, and – I was to learn later – a small airport.  Most importantly, at the heart of the community there is a small shrine, where candles burn with the prayers of the faithful.  The statue of Mary sits next to a small grotto, smaller statues and candles burn within.  There are tables and chairs situated on a green lawn, where one could sit and take repast.  As I stood a moment, taking in the message that was being spoken to me by this discovery, I saw a sign:  Mass is held at Our Lady of Guadalupe Shrine on Saturdays at 5:00 pm.  Chiriaco Summit is a small community of family and workers.    I said a prayer for my family and for the travelers along the road that day.  This week, I purposefully stopped at Chiriaco Summit.

After my rest this week, I took some change from my vehicle and walked to the shrine.  As I placed my offering into the cup in the shrine, I said prayers once again for each person in my family, for the travelers along the road, and for the family and employees of Chiriaco Summit.  Afterward, I sat on the bench, listening to the spring birds, the hustle and bustle of daily life, and the song that I could hear in my heart.  In 1998, The Marian Library Newsletter is quoted as sharing that “Christ's mother, the mother of all people, the first disciple of Christ, is a motive for union of all Christians. Marian sanctuaries are places of prayer for the unity of all people.”  What better place for someone like me, self-described as “Transreligious,” whose Christian background has been Protestant, to find sanctuary along the road?  As I meditated, and long after driving away, I contemplated this thought:

Chiriaco Summit is a community of faith and it is a place of hospitality.  Many years ago, I read a poem by Sam Walter Foss.  I thought of this poem now:

The House by the Side of the Road

Surely, this is the philosophy of those who live and work at Chiriaco Summit.

The Shrine at Chiriaco Summit: 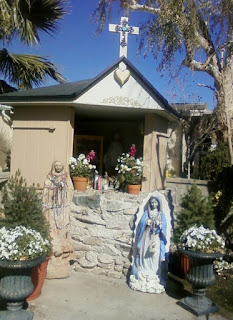 Posted by Suzy Jacobson Cherry at 11:15 AM

Sermons and Messages beginning April, 2014 can be found at Suzy's Sermon Blog

A Little About Suzy